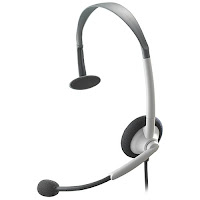 My parents, I will assume yours as well, never grew up with video games. In fact, it's shocking how terrible my mother's hand eye coordination is possibly due to lack of video games ;). It was difficult to play catch with her, she prefered a good game of drop - or I threw terribly bad. Give her a PS3 controller and Gran Turismo and instead of using the sticks to steer she will lean sideways. It's hilarious!

I digress... It's because of my parents' lack of video games, that they have no idea that you can not only play online with other people, but in fact talk and communicate with other players - be it PSN, Xbox Live or Ventrillo. In my past when I was an avid gamer of Battlefield 1942 / BF 2 on PC she'd regularly question my intense talking "to myself" during matches or clan practise.

I'm going to assume, that the whiny, angry, yelling kids on PSN, Xbox Live and Ventrillo are also children of non-gaming parents - this does not include games like Pong, I am only concerned about in-game voice chat.

Now, enter my generation, a real video game generation, growing up with affordable, modular video game systems. Ignore the scary fact that I could have children one day, consider: I've grown up with online games and know certain etiquette for chat rooms. Is it because of this that I would discipline my children if they made a fuss in a chat room? I'd be able to explain to them how big of an idiot they're making of themselves being a selfish, annoying, little brat to complete strangers all for the simple fact... I grew up with it and I've done that.

My generation is in a unique position to teach their kids not be idiots online, because we know what it's like to be idiots online without parental guidance.
Posted by Unknown at 12:00 3 comments: Links to this post

October 2008 was a fantastic time. I had just started my "year off" - turned into 16 months ;) - from University, quit my Sales job at AirSource and was looking for a job in the industry to give me some real world experience. My lack of Python lead to an unsuccessful application at VendAsta. It was very kind of VA to refer to me zu. A week later I was through the interview process and was accepted as a full-time developer.

I was psyched. A real job.
Since I started zu I  was part of the PotashCorp team. Started with maintenance and was part of the reprogramming team. The redesign was a fun project with lots of ups, downs and learning. It was exciting and nerve wracking at the same time.
January 2010 I went part-time to continue with my University. My original year off had turned into a fantastic 16 months of full-time employment.
Last week I resigned and am done zu April 29th. It was a tough decision, but one I had to make for myself. I have a new opportunity doing contract work for SaskTel Labs.
I learned a lot at zu. How to better manage my time, better communicate my ideas to people that don't have my thought process, design patterns I'd never heard of before, writing more efficient code and teamwork.


Why am I leaving zu? The main reason is change. I've been doing some kind of LAMP work since I've been 16/17. Either playing around myself or working. I need an opportunity that will help me learn new things, and at SaskTel Labs I have that opportunity. It sounds like I'll be working on BlackBerry, Android and SproutCore related things. I'm psyched, again.
I will dearly miss a lot of things at zu, especially the atmosphere. It's been an amazing (just under) two years, thanks for the opportunity and I'm sure our paths will keep crossing.
Posted by Unknown at 10:42 3 comments: Links to this post